Why People in the Performing Arts Need to Sleep In

“Don’t call artists before noon! They always party at night, but can’t get their behinds out of bed when everyone else does.” Is that a prejudice or are theatre people really that lazy?

I’d say different strokes for different folks, but when you are one of those who sleep in after a performance, I am sure you occasionally get smiled at or have to listen to an overweening comment. If it helps you to remove that guilty feeling for staying in bed after most people have gone to work, here is why it actually makes sense not to be an early bird for theatre peeps.

Let’s first look at the common pattern of a “normal” person’s workday: In my neighborhood, I see people’s windows light up around 6:30 am, rush hour starts between 8 am and 9 am, and by 10 am most people have arrived at work. That gives them a good hour or two to wake up before starting their most productive phase of the day. Besides a lunch break, most office workers now need to focus on their assignments until 5,6,7 pm. (I know, some are working more hours than that!) But once the office door is shut, the day still offers a few more hours for organizing little stuff, relaxing, doing sports, meeting friends, having a drink, or watching a movie. After your work tasks have been accomplished, you can gradually lower the intensity towards a good night’s rest. That would be around – let’s say – 11:00 pm! 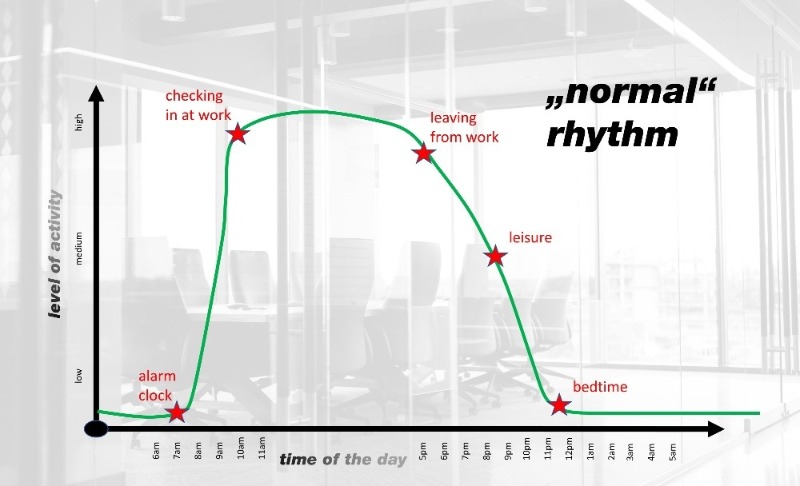 The last few hours before bedtime is also when people tendentially like to enjoy themselves, be entertained, and, for instance, watch a theatre show. At this point, we go to work! While the audience can sit back and relax, performers, technicians, and other crew members have to raise their levels – both mentally and physically. Even though our biorhythm would naturally slow down in the evening, we pump it up to the maximum level around 10 pm.

Trying to keep a “normal” rhythm

After the curtain has closed, both parties – audience and crew – could technically be in bed before midnight. But who is able to sleep straight after an adrenaline rush? Who can go from 100% to Zero within an hour? And, more importantly: who wants to skip the satisfying after-work-relief?

Let’s anticipate, we enjoy our morning hours so much that we force ourselves to bed straight after a performance for being able to get up at a “decent” time. That also means we would go through a whole day’s tasks before having to deliver a peak performance. Can you imagine “normal” employees spending 10 hours on chores, playing with their kids or just hanging out before going to the office? Even with the help of an afternoon nap, they’d be tired by the time they start working. 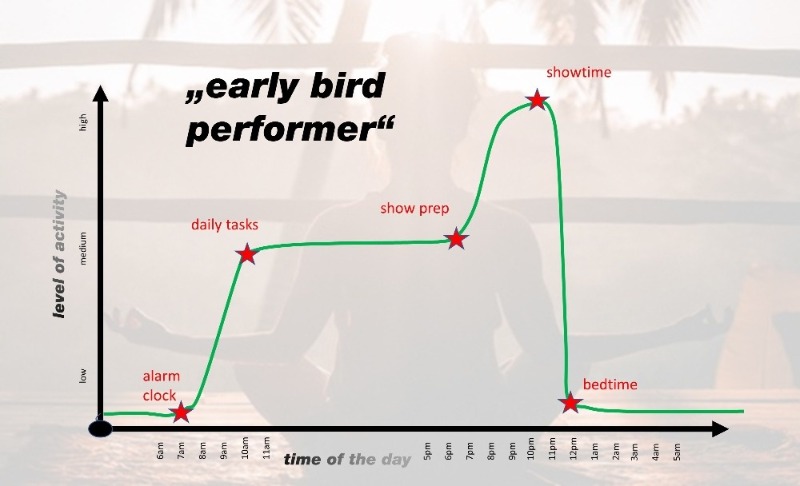 Conclusion (=The reason to sleep in)

The same happens principle applies to theatre people when they get up at the same time as the rest of the city does: They are having a hard time being productive at night. The natural result is that many of us involved in the show industry shift their daily pattern– in terms of “Getting up/Going to work/Slowing-Down/Bedtime” – to a later hour. Without any guilt: this helps to perform at 100% in the evening while still having pressure-free time for yourself after work. 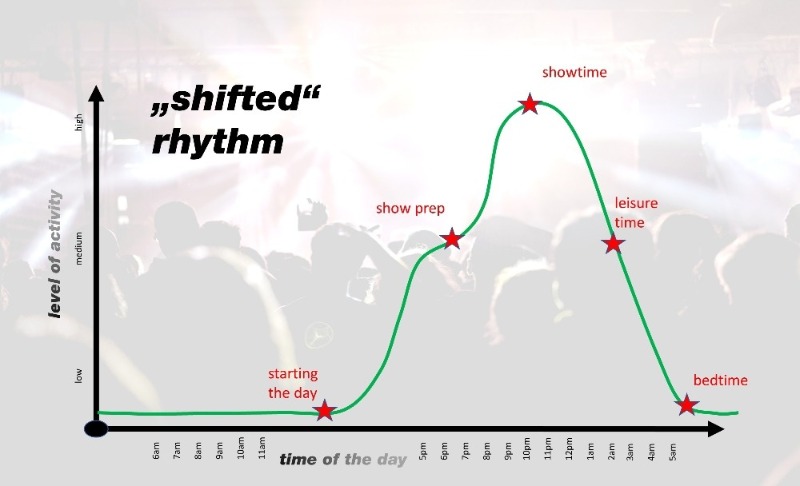 What are your experiences? How do you pace your energy before a late performance? I’d like to find out!

But most of all: Stay positive and focused!